Note: the following is a special guest review courtesy of my lovely wife, Margaret. Margaret is an extremely fast and voracious reader who devours books in a weekend that would take me months to finish. After she polished off the highly-regarded Farseer Trilogy, I politely requested (and begged and pleaded) for her to write up her thoughts for my blog. So, please enjoy. 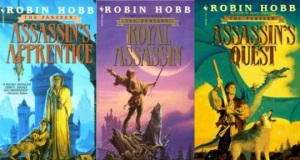 The Farseer Trilogy by Robin Hobb is an enjoyable trip into a fantasy realm which will likely keep you slogging along dutifully for all of its 1900 or so pages. While the pacing of the story is sometimes questionably slow, it is impactful and may have you continuing to think about the characters even after the series has ended.

The trilogy begins with a child of six, FitzChivalry, alone in the world and the bastard son of a soon to be king. Once it is found out that he has arrived at court, things begin to go horribly awry. FitzChivalry struggles with coming into his manhood largely isolated from anyone who really knows him or who he feels has his best interest at heart. He is frequently harassed by a jealous Uncle, Prince Regal. Meanwhile, he must lend allegiance to his grandfather King Shrewd–for his room and board so to speak–but must also serve him by delving further into a state of isolation and secretly becoming the King’s assassin.

A side-story to FitzChivalry’s personal struggles is the ongoing fight for the entire Six Duchies; the Red Ship Raiders are attacking all the coastal towns and inflicting some strange damage to the people. Additionally, two mystical abilities are thrown into the mix, one deemed “beast magic” and publicly condemned (the Wit), the other a power used by Royalty and their trained and expert disciples (the Skill). FitzChivalry is blessed/cursed with both so he must learn to use one skill and hide the other while traversing his complex narrative.

The series doesn’t focus on rapid action, but rather is a slow burn building on character development and examining human relationships. When fighting did take place, I was often so invested in the characters that I almost wanted to cringe. On the whole, Robin Hobb has taken a somewhat basic storyline and elevated it to a complex and roiling internal self dialogue, examining all that FitzChivalry is asked to do and all that he has to give up to be a King’s Man.

With that said, I think what Ms. Hobb does so well in building the characters and their in-depth dialogue may be done a little too frequently. Several times I found myself wishing that she had done more editing of the characters’ thoughts, as well as the storyline in general when it became too repetitive. On the whole, it is an excellent effort and if you like long books and fall in love with character development then this series is for you.

1 thought on “Book Review – The Farseer Trilogy by Robin Hobb”