I’m very pleased to announce the release of my second full-length novel, AETHERIA’S DAEMON, an epic fantasy of 155,000 words.

First up, the goods. Here’s the cover: 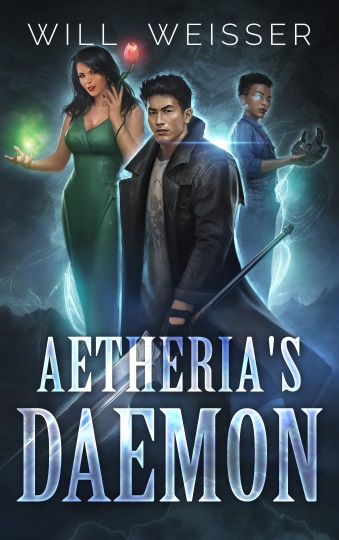 The book takes place in the world of Aetheria, where a thought can conjure any object into existence—temporarily, at least—and humans are ageless. New people appear seemingly at random, and no one knows exactly why. Until…

Meli, a practitioner of the arts of plant and animal creation, has a dream in which she is holding a baby, something no one in Aetheria has heard of before. Drawn by a powerful urge to find the truth behind her vision, she recruits Ariden, an unsociable vagabond and legendary fighter, and Karis, an aged airship engineer with the appearance of a teen girl, to help her make a perilous journey across the ocean.

Secondly, my usual gentle reminder: adding books to your shelves on Goodreads, rating them and especially leaving reviews on Amazon is immensely helpful for me (and every other author).

Finally, please note that this book should not be confused with ANKARAN IMMERSION, which is coming out later this year from Dragon Moon Press. Much more will be forthcoming on that, so watch for more news later this year.