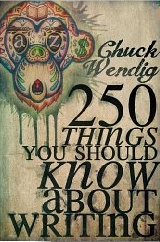 Chuck Wendig’s 250 Things You Should Know About Writing will always hold a bit of nostalgia for me. I was around a third of the way through my first novel when I stumbled across it on Amazon, and at the time I had never read anything about how to write–actually, it had never occurred to me that such books could exist. What clinched the deal was the price, 99 cents, and the pitch, which reads (in part): “Contained within are things you should know about plot holes, self-publishing versus legacy publishing, “on-the-nose” dialogue, story versus plot, metaphors, copy-editing, killing darlings with a claw hammer, cursing like an undead pirate, and generally being a cranky and irreverent creative type.”

I’ve read the book a few times since then–it’s the sort of thing you can absorb in one toilet-sitting, assuming you hit up an Indian buffet the night before–and I’m still not entirely sure what to conclude about it. The book is laid out as a series of small vignettes, much like Nietzche’s aphorisms. An especially apt comparison, because the experience of reading Wendig is actually a lot like reading Nietzsche; you laugh, you recoil in digust, occasionally you think deep thoughts about the meaning of life. Then when you finish the book and put it down, you have no idea what you were just reading about or how you’re supposed to apply it to reality.

Now, I know that sounds harsh, and I also know that Chuck is a super awesome guy with a well-deserved and devoted fanbase who as you read this are probably lighting torches and sharpening pitchforks, or doing whatever it is people do to pitchforks to get them ready for a good maiming session. But I want to make it clear that for 99 cents, you’d be a fool not to buy this book. For one thing, it’s funny as hell. And I don’t mean that in a lame “it’s amusing for a book about writing” kind of way. I mean that the humor in this book really caught me off guard and made me laugh hard enough to risk a serious toilet-seat mishap. Some examples:

Don’t abandon your novel. Don’t do it. Don’t make me kick you in the nuts. There. I did it. I kicked your nuts. Taste that? In your mouth? Them’s your nuts.

If I gaze upon a wallpaper with an endless pattern, my eyes glaze over and I wet myself. But look upon a wall with variety–a photo, a painting, a swatch of torn wallpaper, a dead hooker hanging on a hook (that’s why they call them “hookers”)–and your eye will continue moving from one thing to the next.

And if you didn’t find any of those excerpts funny, you suck. Sorry, it’s the law.

Secondly, 250 Things is useful for at least one thing: spreading enthusiasm. It’s a good book to read if you’re stuck in that “should I even bother to do this” stage (or if you’re making your eighth of ninth return to said stage). The first 50 or so aphorisms cover motivation in depth, and Wendig’s voice is perfect for revving you up and making you feel like you can conquer the literary world, at least until you open Microsoft Word again.

And my last caveat: all of the writing advice in this book is good. I’ve read so many craft books which make me want to put down my finger and wiggle it back and forth while declaring “this advice is total junk which will lead young writers down a road to ruin!” None of that is happening here, which is good, because it smudges the screen of my Kindle. No, my issue with 250 Things isn’t so much with the content, but the presentation.

So what’s the problem? Simply put: when it comes to teaching, saying something once is never enough. This is a universal phenomenon which I’ve experienced first-hand while teaching martial arts. Here’s an idealized version of every martial arts class I’ve ever taught, ever:

Now, what’s the issue here? It’s not that the students don’t want to learn, or that they’re unintelligent or somehow less capable of learning than average people. It’s just that the human mind thrives on repetition and correction. Hence the standard “craft book structure”:

With 250 Things, you’re getting number one and perhaps three, but missing the critical number two (unlike me when I read this book; damn Indian buffet). And that’s crucial, because a craft book without examples is like a blog post that ends with a poorly thought-out simile: amusing, perhaps insightful, but ultimately sort of unfulfilling.

So, go and buy this book. Read it several times. Then go and write a novel. Realize said novel is terrible, and in the midst of your third revision go and read this book again and think “of course, this makes perfect sense, why didn’t I follow this advice in the first place?”

Have a happy holiday, and keep writing.

Note: this post is part of a series where I give (sort of) tongue-in-cheek reviews of some of my favorite and least-favorite craft books. The previous entry in the series was Writing Popular Fiction by Dean Koontz.

1 thought on “Craft Book Round-Up: 250 Things You Should Know About Writing by Chuck Wendig”