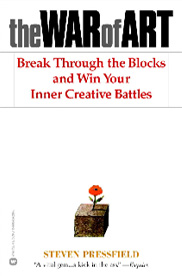 I read this book at the request of a friend who had heard rave reviews from various media outlets proclaiming it to be the greatest thing since spellcheck (perhaps the fact that he was too lazy to read it himself speaks volumes as to whether or not he needs it).   Impressed by the blurbs, I put it on my Kindle and ended up consuming it over the course of a couple hours (it’s not that engaging, but it is very short). What I found was a pretty good self-help guide, mixed with a good smattering of nonsensical blather, especially in the final third. Read on for details.

Writer’s block, lack of motivation, procrastination–whatever you want to call it, Pressfield approaches the problem by grouping various work-impeding processes together into what he calls “Resistance.” According to him, Resistance is a “natural force” inside our own minds which prevents us from doing anything which could really benefit us, which in his case is writing novels, but which can also apply to anything from kicking drugs to losing weight. After introducing this concept, Pressfield goes on a bizarre rant about fundamentalist Islam, before proceeding to explain the various guises that Resistance can take in our lives. These include rationalizing, fear of criticism, fear of success (can’t say I’ve ever suffered from that, but to each his own), blaming others, and so forth. I enjoyed this section quite a bit, as it does a good job of showing the lengths we are willing to go to believe our own BS. I suspect most writers, amateur or pro, will most likely see some familiar things here.

In part two, Pressfield outlines a mindset (“going pro”) which he believes is the (best/only) way to overcome Resistance. Despite one chapter titled “How to Love Being Miserable” in which he explains how miserable he was in the Marine Corps while forgetting to tell us how to love it, this part is where the book is strongest. Most of the advice is the same as you will find if you look this sort of thing up online (write every day, just sit down and start writing without thinking about it, don’t stop and worry about the quality of your work, etc.), but Pressfield makes his points clearly, and more importantly repeats himself enough to introduce that brainwashing feeling which good self-help books tend to create.

Unfortunately, he doesn’t quit while he’s ahead, and part three is where The War of Art takes a nose-dive into wackiness from which it never recovers. Here, Pressfield discusses his religious ideas involving Greek muses and angels, which he claims one needs to tap into to produce one’s best work. While he does say that we can choose to view all this as a metaphor, my own personal bias prevents me from seeing it as anything but unbridled silliness mixed with pseudoscientific drivel (example: “Order has a natural tendency to emerge from chaos”). In one egregiously offensive chapter, Pressfield discusses a friend of his who he believes cures cancer by helping people write a novel like they’ve always wanted to, and further speculates that perhaps not acting on one’s artistic desires is what causes cancer in the first place. Sigh.

But despite all this, I would recommend The War of Art to the “I’ve-been-watching-youtube-videos-all-day-why-is-my-novel-not-done?” contingent, if only because it’s the only book I’ve read which is all about writer’s block, and it seems to cover the topic pretty well. Just do yourself a favor: stop reading it 2/3rds of the way through and go write instead. Hey, maybe that was the idea to begin with?

Note: this post is part of a series where I give (sort of) tongue-in-cheek reviews of some of my favorite and least-favorite craft books. The previous entry in the series was 250 Things You Should Know About Writing by Chuck Wendig.

1 thought on “Craft Book Round-Up: The War of Art by Steven Pressfield”